This is a guide that focuses on data-driven optimization of Outbrain campaigns.

Several examples are provided; these are for illustration purposes only. There is a certain amount of “data discovery” that you will go through figuring out what your upper and lower limits on data before making an adjustment.

The screen shots are from Brax; however, you can apply these in Outbrain Amplify - I just find it tedious and time consuming.

There are two cardinal items that must be setup correctly for you to profit from native ads.

First a general rule of thumb is to apply optimizations at the campaign level; not the account level. There are certainly exception to this rule; however, this guide is based on campaign adjustments.

Third, this guide is based around cost per action “CPA” rules, understand this action can be anything:

Fourth, these optimizations are at the section level, a specific area on a publisher website with Outbrain ads.

Another important thing to remember is optimization rules break down into two components: action and conditions. The action is the change you want to make such as blocking a section or changing a section bid. The conditions is the criteria for the action to take place.

Now that we have all that out of the way, onto the good stuff.

Block Sections with No Conversions: 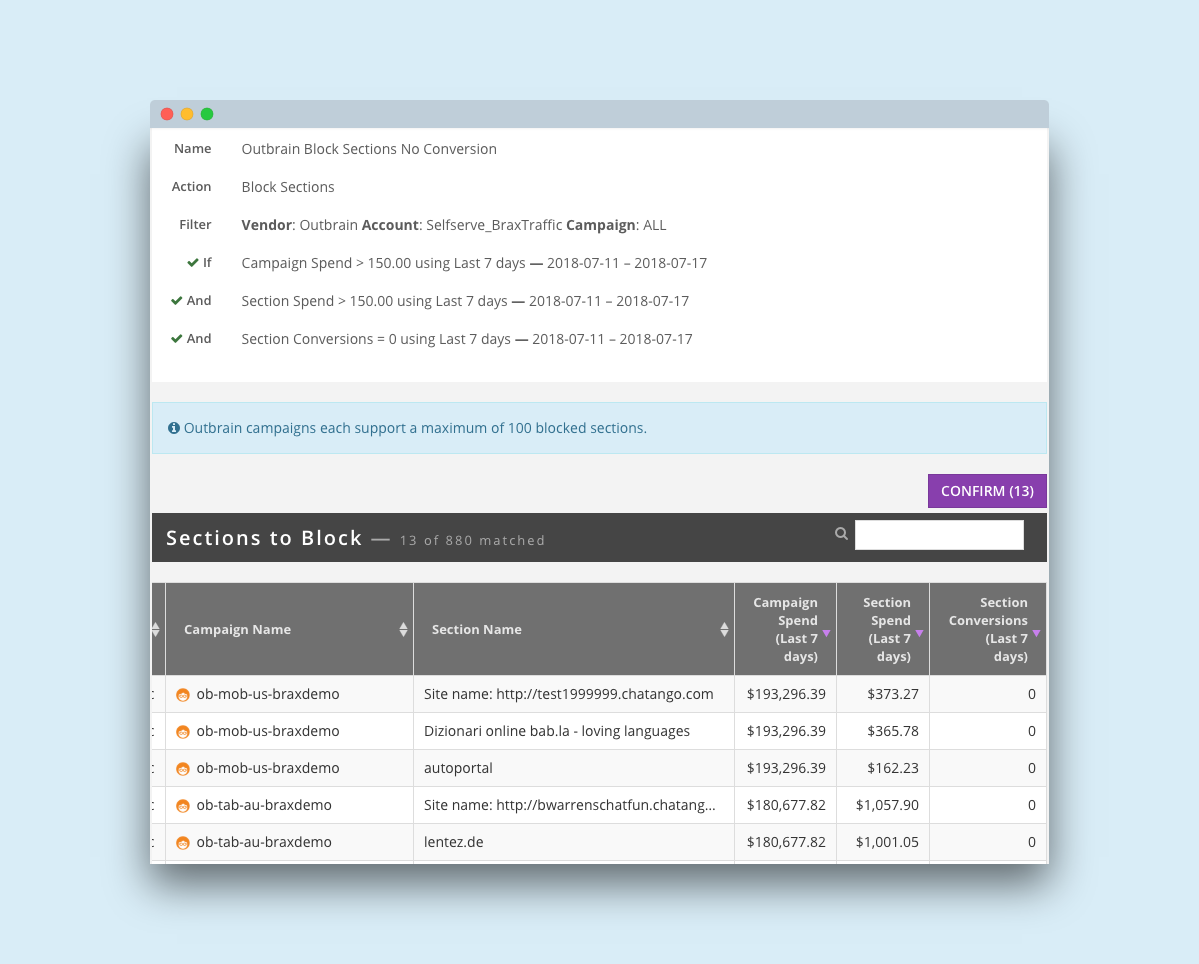 Block Sections with No Sessions:

I recommend using Google Analytics for this; even if you don’t use it for conversion tracking. Another alternative is to use a click tracker (Voluum, Thrive, etc) and base it on clicks from the landing page to another page. This is often called LP CTR or landing page click thru rate. 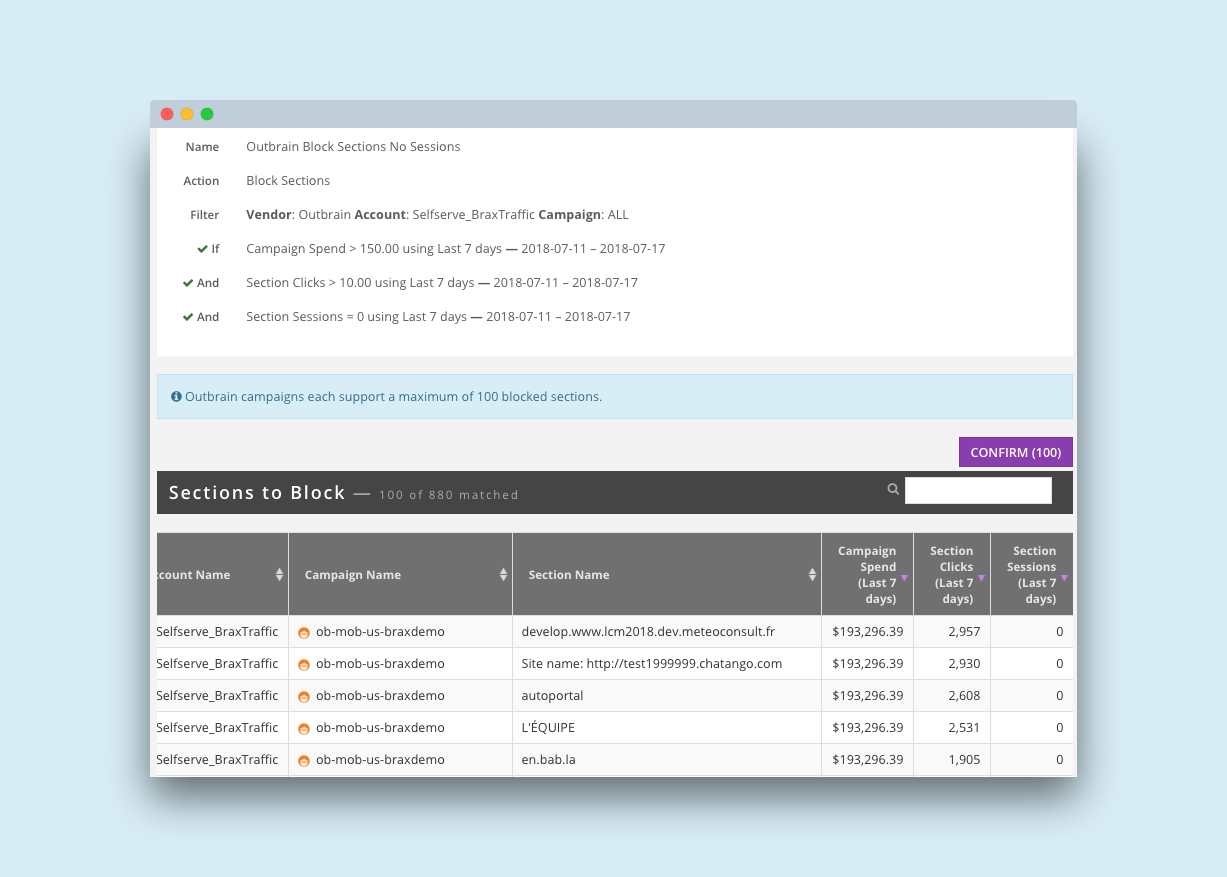 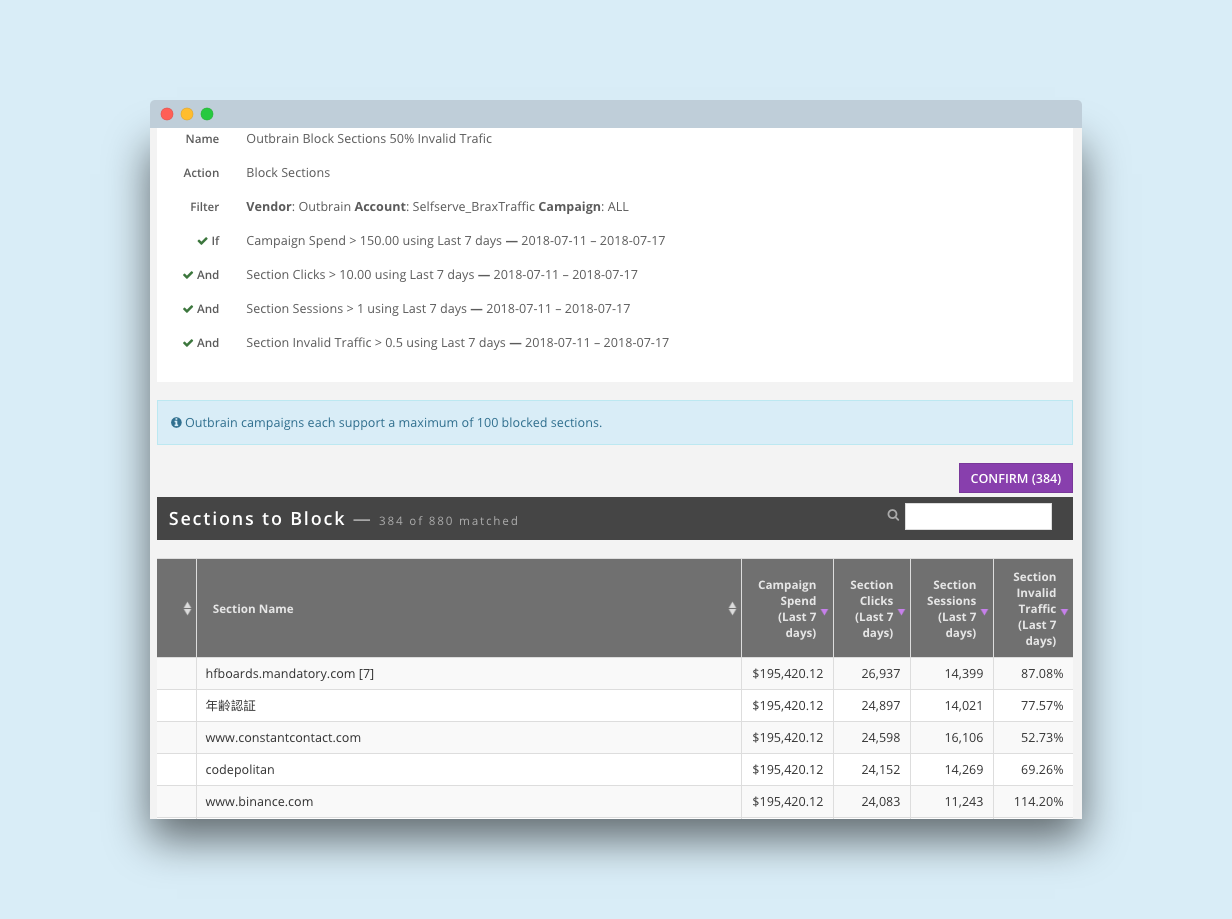 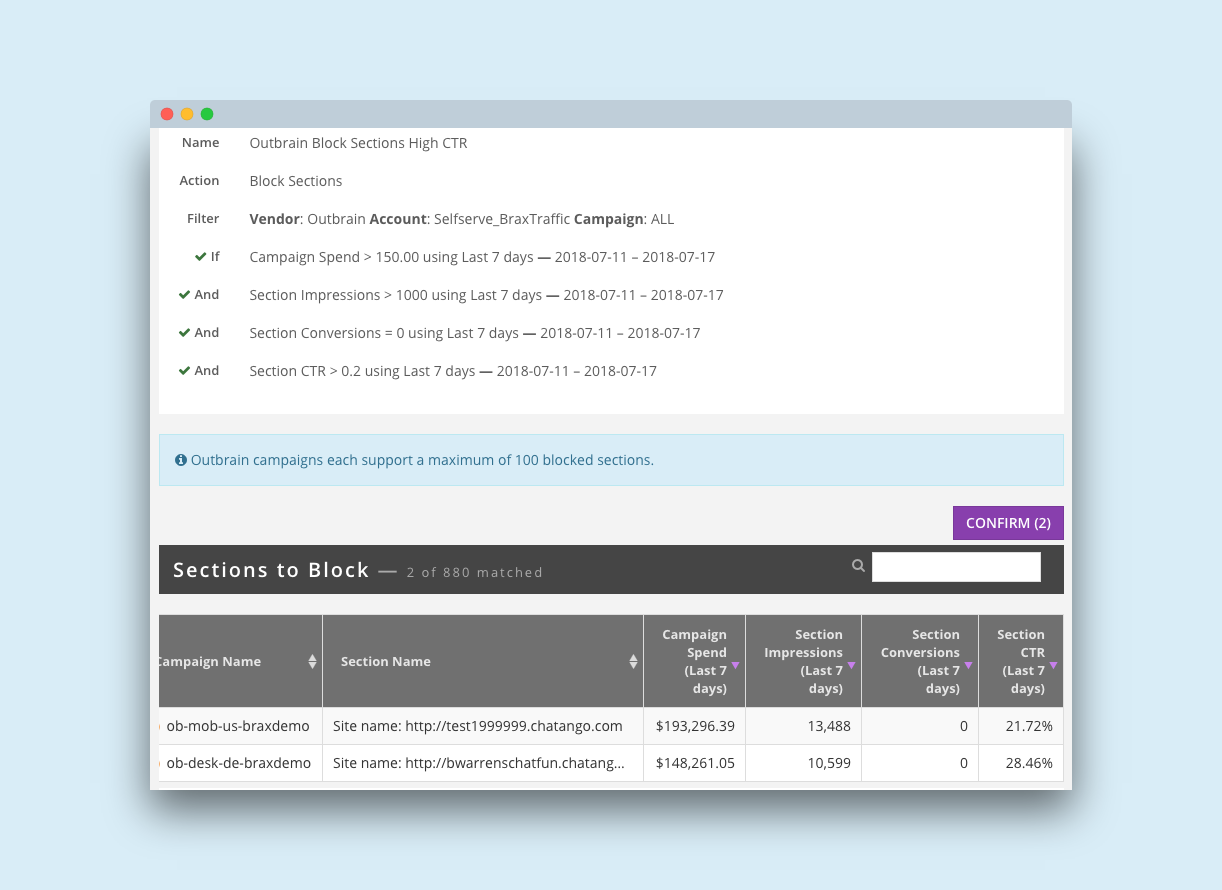 Decrease Bid on Sections Above CPA: 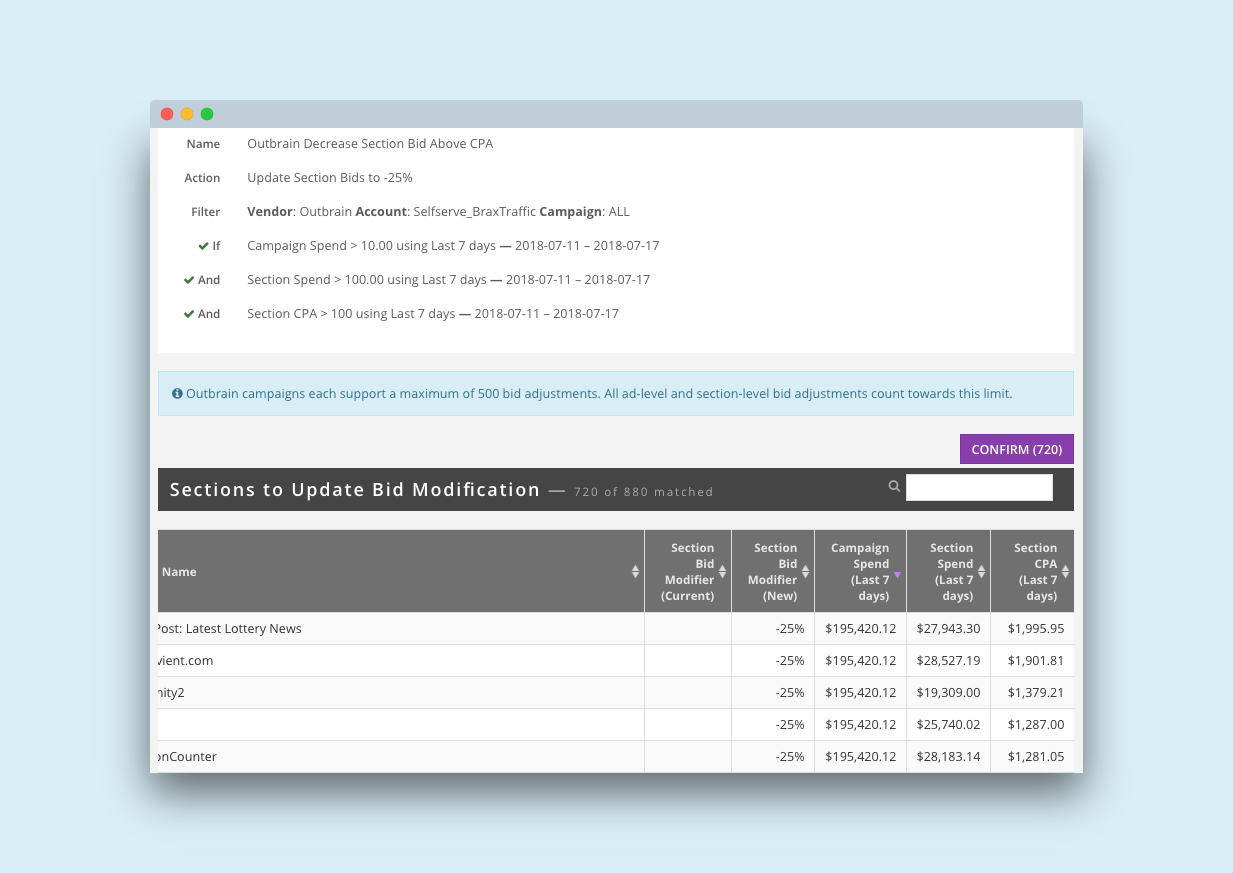 Increase Bid on Sections Below CPA:

This rule is aimed at getting more volume from a section that performs well by bidding slightly higher. The idea being you will be in a higher position on that publication which can subsequently increase CTR. You want to exercise caution and increase the bid slowly so a profitable section does not turn upside down. 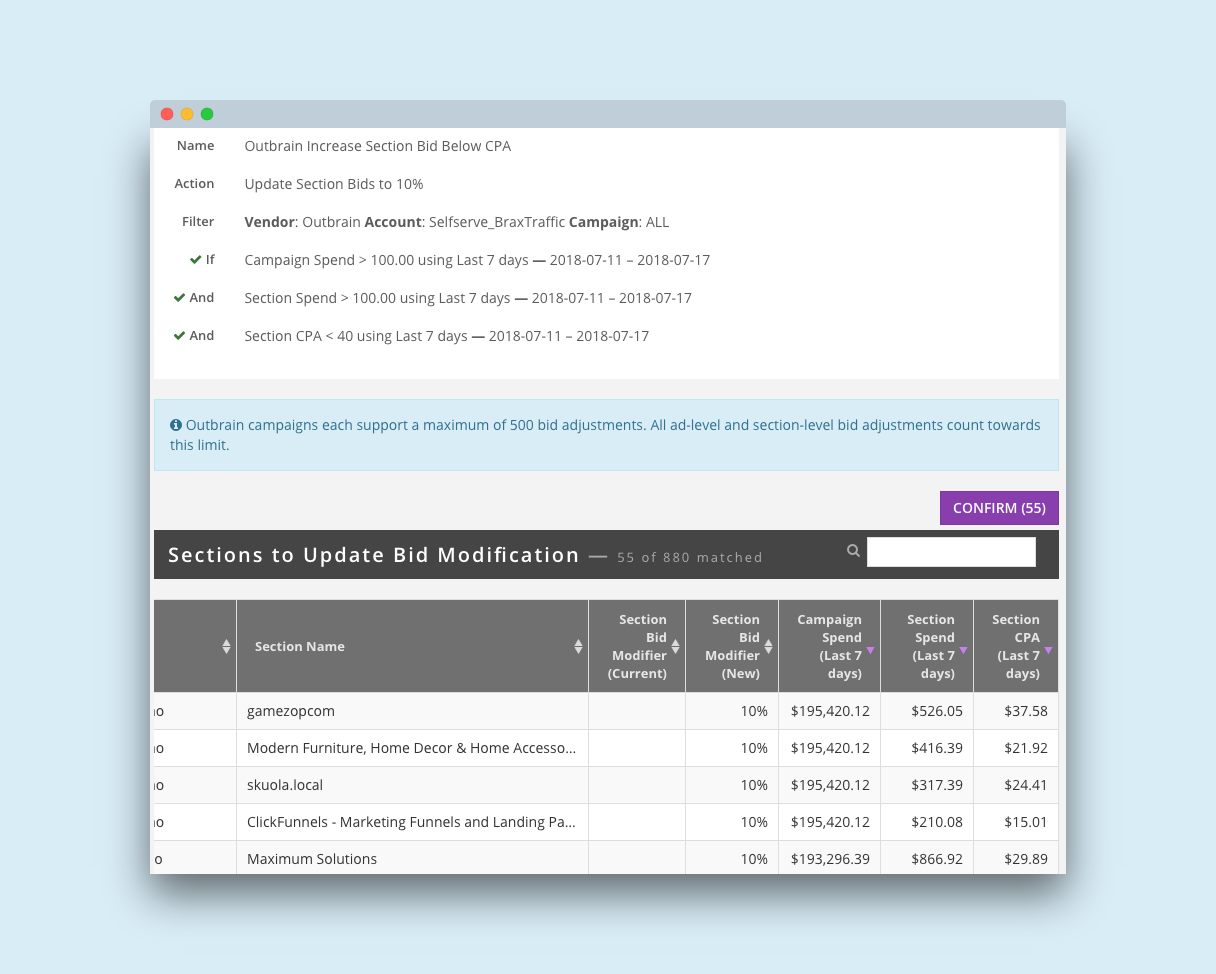 Remember that Outbrain is an auction that aims to maximize the cost per thousand impressions (CPM) for each section. So if an ad creative has a high CTR on one section and not another then it will show more on the first section.

This is why you may see a top spending ad that does not have the highest overall CTR, because other publisher sections with lower CTR drag it down.

The calculation for CPM (set this up in Brax):

Then see it at the section level and use in rules for optimization:

In addition, try looking back 60 or 90 days to see what shows up.

I recommend a campaign spend of $10, ads & publisher spend of $5 at a minimum. You should have a CPA goal (or similar replacement) and base it on 3x the cpa goal. For example $10 cpa goal use a minimum of $30 for campaigns/ads/publishers before adjusting. The common exceptions are obvious fraud or poor performance.

Usually the best approach to optimization is to methodically go from manual to automated process. If you have not done the optimization manually yet, automating it will likely make a mess.

Bill Gates is credited with saying:

At the same time, you need stop gaps in place to limit risk. Hopefully this guide will inspire you to put in place some stop gaps.

Once you have defined, tested and trust rules then you are ready to automate. Here is a guide to automating rules.